Software for the system can be an extension of autonomous vehicle technology.

Then, funding for the modular maglev monorails can be achieved by diverting tax dollars from existing transportation systems.

In lieu of building new massive concrete freeways and mass transit rails, PMT guideways can be built, at much lower costs.  The lighter monorails will require less material to build, and as a modular system, the costs will continue to decline.

"The technology at the heart of the train is Maglev, short for magnetic levitation, technology. A concept that's been around for more than 100 years, Maglev tech entails the suspension of a train via powerful magnets to remove the friction present at the rails of conventional trains.

"The catch with maglev technology is that there's still friction from the air rushing past the train as it hurtles down the tracks. To date, the fastest Maglev train managed about 361 miles per hour -- not much faster than a conventional high-speed train.

"A levitating rocket sled at Holloman Air Force Base in New Mexico recently broke the world speed record for maglev tracks, clocking in at 633 mph.

"With only wind resistance holding it back, the sled and its rocket booster surpassed the previous record — set earlier this year by the same sled — with ease."

"An airless tube -- a vacuum -- would remove that air drag, allowing for impressive speeds. (The trains themselves will contain pressurized air, just like an airplane.) A cheaper alternative to removing the air completely is to depressurize it, the researchers say.

"The researchers say the train is cost-competitive with a traditional high-speed train because it has a smaller tunnel and requires less boring.

"The Vactrain outweighs the current modes of transport in several ways, making it a ground-breaking idea. It has a clear edge over present airplanes, trains and automobiles as it causes no pollution and does not operate with gas or petroleum. Thus, while the present transportation would soon be in a sticky situation with the energy crises which the world is facing with dwindling resources of petroleum and gas, the Vactrain would emerge victorious. Moreover, the Vactrain is unaffected by any extremes in weather conditions. It has low maintenance costs as it employs the high-lifetime maglev technology, which also minimized wear due to friction. Additionally, it has low operation costs and 25% energy consumption when compared to aircrafts. Due to all these factors, the Vactrain triumphs over the current means not just in the future but even in present situations making it highly superior." 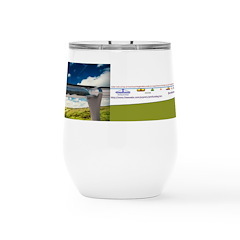 Buy some ties for Christmas presents!